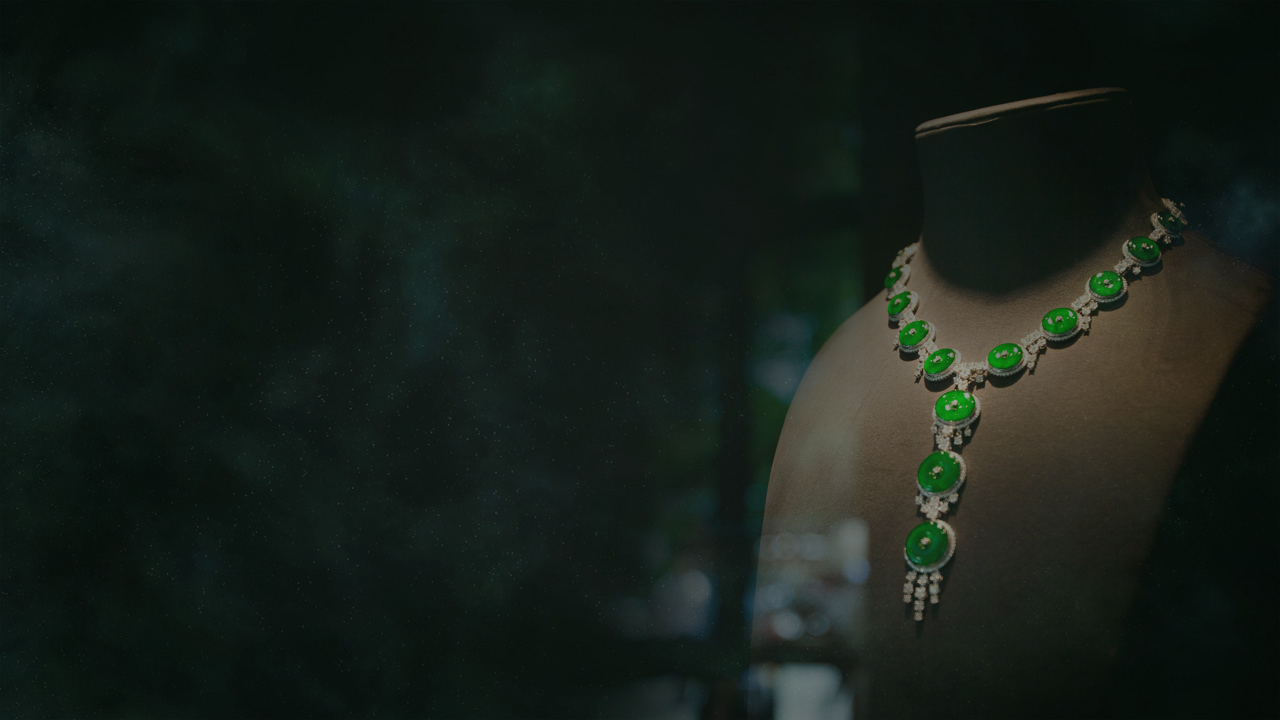 JADEGIA is a brand of fine jade that has ascended to heights of excellence from its roots in Taiwan.

For close to a century, from the era of Japanese rule in Taiwan to the present day, a succession of transfigurations overlaid with the story of a family over three generations, continually following in its predecessors’ footsteps, crystallized into a brand distinguished by innovation. This tradition of sons building upon the heritage they have received from their fathers has been accomplished in tandem with changes in the jewelry industry that have enabled the value associated with quality jade pieces to reflect both the aesthetic concepts and the determination to deliver excellence that have gone into these wonders.

Diligence and Innovation: from a Gold and Silver Shop to a Jewelry Boutique.

Hank Cheng, the current CEO of JADEGIA, has been committed to creating a top of the line brand of jade jewelry, one that would seek to convey the amply abundant cultural connotations of premium jade. And yet, the path that has led to the brand of today began on a country lane long ago in Southern Taiwan, on a dilapidated bicycle…

In 1932, Kuo Cheng (Hank Cheng’s grandfather) founded the Jin Sheng Li Gold and Silver Emporium, a store that dealt in gold and silver ornaments, in what is now Kaohsiung’s Fongshan District, as a means to provide a livelihood for his family. The shop was taken over by his son Fuxing Cheng in 1969 and then renamed Jin Li Yu, Gold, and Silver Jewelry.

The family’s jewelry business operated along a traditional framework prior to the 1970’s. This included stocking gold and silver pieces, reworking and then selling valuable works brought in by clients, and scouring homes in the countryside for items worth purchasing. As a boy, Hank Cheng would often see his father wearing his bamboo hat and journeying off on his rickety bicycle, regardless of the weather, letting nothing stop him from carrying out his responsibility as the head of the household. The squeaking sounds of that bike and the image of his father’s silhouette as he was pedaling away are boyhood memories that Hank Cheng will always have.

In addition to gold and silver jewelry, his father’s store would also have jade ware, coins, and antiques displayed for sale. Consequently, as he was growing up, Hank Cheng received an on-the-ground training regarding the various materials and methods used to construct appealing decorative pieces and would listen in on the conversations his father had with his clients, talks that revealed an earnest straightforwardness on his part- and even more importantly- a sense of loyal camaraderie.

After the 1970’s, Fuxing Cheng turned his professional focus towards jade. This was the time that older specimens of jade were becoming much scarcer in Taiwan and the raw jade industry in Myanmar (Burma) was using Hong Kong as a base to house workshops and markets. He then decided to head to Hong Kong and launch a career there as a jade dealer.

1982 marked the start of Hank Cheng’s formal involvement in the family firm’s operations. He wanted the business to expand and function on a deep level throughout the several critical nodes in the supply chain that defined the industry, facilitating a comprehensive approach that would ensure premium quality. So, he had the company branch out from only selling and buying jade pieces to acquiring jade workshops, and then having its own studios for in-lay work, as well as a retail presence on Canton Road in Hong Kong. This millennium began with the establishment of a workshop in the Pingzhou Jade Market in Guangdong Province and the setting up in China of a well-respected brand of jade creations- Yong Cui Yuan. These milestones laid the foundation for the opening of outlets in Guangzhou, Shenzhen, Tianjin, Qingdao, Chengdu, Nanning, Hangzhou, Changchun, and other cities throughout China.

As his business was expanding, it reached a certain point that led Hank Cheng to ask himself if this ever exponentially unimpeded growth would allow his family’s views towards life and their value system, as well as the integrity of the timeless cultural milieu of jade, to be passed onto future generations. After much thought, he concluded that the answer to his soul searching was to return to his native Taiwan and so JADEGIA was born.

JADEGIA’s specialty boutique on Taipei’s tree-lined Renai Road opened in 2008. It gives visitors an initial artistic impression of subdued elegance. The large bay windows reflecting the leafy surroundings and the look of the multi-colored imported Japanese tiles on the walls, combined with the flowing water motif outside the windows, cleanse the mind of the city’s bustling urban atmosphere, so after being subsumed by a general sense of calm, one can properly enjoy being immersed among quality jade.

The progression from a gold and silver shop to a jewelry boutique embodies Taiwan’s industrial transformation and restructuring, the dynamic driving force of family heritage, and finally the strength of cultural pride in giving one the power to bravely and resolutely face the world!

The Return to Core Principles: the Brand Mentality behind JADEGIA

Looking back on his youth spent at his father’s jewelry store, though Hank Cheng was among countless varieties of rare and valuable gold and silver adornments, coins, and antiques, he was most attracted to the jade pieces his father exhibited.

Hank Cheng believes that a piece of jade is like a person, with its own appearance and personality, and totally unique beauty. The effect of jade is extremely inclusive and ranges from showcasing the cultural essence of Greater China and serving as a vehicle to give voice to one’s inner being, to demonstrating the latest currents in fashion, since when jade is called upon to work with other materials, the elements mutually and resoundingly complement each other, giving a narrative aspect to multi-level designs...

The Chinese are a people who love jade and the cultural impact of their jade appreciation has had a far-reaching influence in Asia. JADEGIA, with its access to vast stores of uncut jade, has assumed the profound duty of furthering this heritage of jade appreciation to future generations by harnessing the professional expertise accumulated over the years, as well as an aesthetic vision, to enable jade to become an even richer part of the cultural fabric. When jade is expressed in a beautiful form, it unleashes a profoundly moving experience that brings one into contact with an innate sense of splendor!